…In my mind when a decision is made it conveys a message of Intent, of purpose.  The Intent has meaning in that the purpose is designed to have an affect, as this Intent creates a force, in of power… 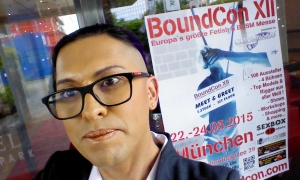 I have been reflecting on BoundCon of recent times due to the fact that on December 24, 2014, I made the decision to go and formally bought my non-refundable Lufthansa airline tickets to Munich.  Yesterday was that one year anniversary, and in my mind is the true anniversary of the May 2015 BoundCon Expedition.

It was by far one of the best decisions I have ever made, as at the time I was still in the middle of this battle with my Concussion. Only later after, during January did I realize how important my decision weighed while I focused on overcoming this traumatic brain injury all while preparing to be in best condition I could be for the trip abroad.  The Power of Intent, the decision to go, gave me a foundation to focus on a long term goal (only 5 months); to recover enough to go.  There were very dark days up to my departure that just seemed as if I would be too sick to really enjoy BoundCon.

Though slowly I made enough progress to truly go with real positive results while in Germany.  As milestones happened, the intent to go was reinforced and grew stronger in purpose, The Power of Intent.  One month after another, days went by as the rage of nausea, sickness, imbalance took me over, depression, anxiety, anger took me at its whim, yet my trip to BoundCon held strong.  The Power of Intent gave me meaning to endure.

Other VERY important factors of-course weighed in giving me hope to overcome, Family; yet as I reflect back of this year, 2015, of the last 18 months of recovery from my concussion, May 2014 to November 2015, I see that the intent to go to BoundCon gave me a desperately needed drive during the darkest of days of TBI to endure.  Herein now,  another 1/2-year has passed since then, from just less than 60 days from today, that eventually, with time and hope, I achieved 90%.