Something on the lighter side of life, I’ve been intent to share the shower/bath scenario.  While in Japan, I learned that it is very important to have a place with a bath.  Read this for a little etiquette on bathing in Japan….The fact that my AirBnB didn’t have one, despite the niceties ranked it down from 4.1 stars to 1.5, as my guest informed me….I mean the person I was sharing it with called it ghetto from the second she got into it and I was yet to get my bags from Narita Airport baggage…LOL…I was like ghetto, I asked once I got my wifi in Narita, “is my place dangerous, is it a slum, unsafe…do we need to move?”…no, it was ghetto because my AirBnB had no bath….

Of-course the damn place was as far from Namba, Minami, Osaka to just say it was in Namba…it wasn’t in Namba at all…of course I was also told by my guest that’s this was a rip-off and should ask for my money back…by the way, service in Japan is huge…so it’s cultural to impose ones will when service is unsatistfying…..And if you haven’t heard of Namba, we’ll see it below in slow-motion…I was utterly floored. Yeah, what does this have to do with baths. Okay, I got sidelined.

​​
To the point, I learned to enjoy a bath even more than I knew I could. Not only to recognize how important a bath was in Japan, but to do both, take a shower first, shave and bath whatever, then sit in a bath to relax.  It’s what I do now, in this drought stricken California I don’t really care, after all my water is a flat rate of $35 per month.  Like WHAT?!, for real man…my water is cheap.  I can’t tell you how much money I’m saving on that one from my old house in Valencia.

While in Nagoya, staying over at my instructors studio, Kasumi Hourai’s place, she had an all-in-one, giant like shower and bath…the room was like a giant shower in normal US house, the walls were plastic, and the drain for water was under the bath tub.  If you can imagine a bath in an airplane, then you got it.  The bath tub was a cube shape about a meter deep at least, and once filled it stayed hot-very hot, for the next person. Sharing bath water was absolutely fine, because after-all you showered before taking a bath.  The photo below isn’t hers, but it’s close.  You can see the hose for the shower, and the cover rolled back for the hot bath…one covers the bath when fiminshed. 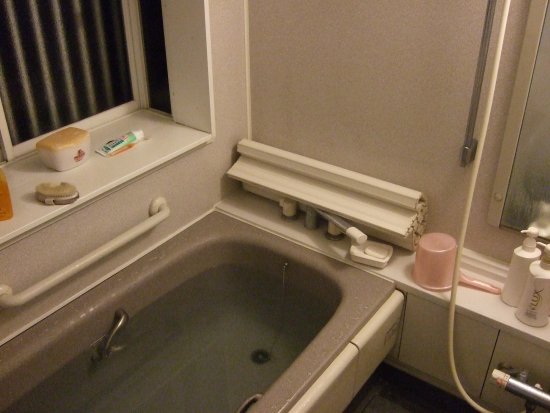 So then I took my bath next, the water was pristine going in, and coming out too, as a must.  I was sure of that.  When I got out of the tub I looked for the faintest soap sheen or god forsaken hair…nope..all good! Beautiful hot water for the next patron. Wink, and a smile.

Now in my personal place in South Pasadena, I take a good shower, wash my hair, shave my legs, then when ready; close up my drain and sit down as my bath fills, but made sure I rinsed it first too.  I’ve even done this on a weekday!   Like yeah, a bath on a Monday morning. LOL!